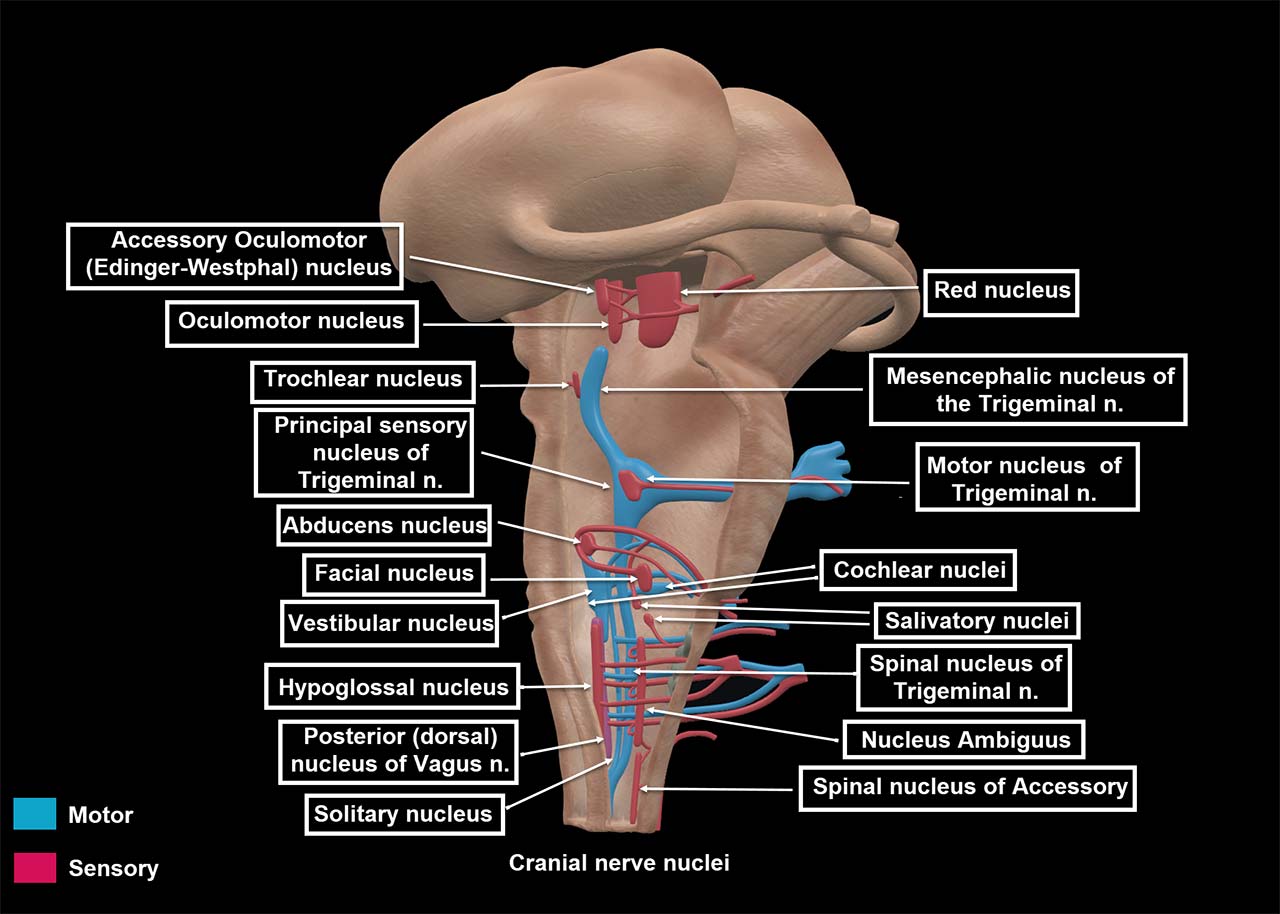 The optic nerve (CN II) does not arise from a cranial nerve nucleus either. It arises from the retina of the eye and transmits the visual impulses to the visual cortex at the occipital lobe.

The accessory oculomotor nucleus (Edinger-Westphal nucleus) is in the midbrain. Fibers that originate from this nucleus pass through the oculomotor nerve reach the ciliary ganglion to supply the sphincter pupillae and the ciliary muscle.

The trochlear nucleus is in the inferior part of the midbrain at the level of the inferior colliculus. The fibers of the trochlear nerve (CN IV) originate from this nucleus and innervate the superior oblique muscle of the eye.

The spinal nucleus of the trigeminal nerve expands from the superior sensory nucleus to the medulla ended up at the upper spinal cord. It receives information about deep touch, pain, and temperature from the ipsilateral face. Additionally, it receives pain information from the facial (CN VII), glossopharyngeal (CN IX), and vagus nerves (CN X).

The abducens nucleus lies in the inferior part of the pons. The abducent nerves originate from it and innervate the lateral rectus muscle.

The facial nucleus. This nucleus lies in the inferior part of the pons, anterolateral to the abducens nucleus. The fibers from this nucleus innervate the facial expression muscles and the stapedius muscle.

The salivatory nuclei, superior and inferior, lie in the posterior (dorsal) part of the pons above its border with the medulla. From the superior salivatory nucleus, facial nerve fibers through the submandibular ganglion innervate the submandibular and sublingual salivary glands. From the inferior salivary nucleus, the glossopharyngeal nerve fibers are originated. Those fibers through the otic ganglion innervate the parotid gland.

The vestibular nucleus is extended posteriorly from the medulla to the pons. It is divided into the superior, medial, lateral, inferior vestibular nuclei. The fibers that arise from this nucleus are responsible for maintaining equilibrium and posture, the perception of head position and acceleration, and the general muscle tone.

The nucleus ambiguus is located in the medulla. Inferiorly, it is continuous with the spinal accessory nucleus. It contributes fibers to the glossopharyngeal, vagus, and accessory nerves. These fibers innervate the ipsilateral muscles of the soft palate, pharynx, larynx, and upper esophagus. They are mainly responsible for swallowing and speaking.

The posterior (dorsal) or motor nucleus of the vagus nerve (CN X) is vertically located posteriorly in the medulla. Its upper end lies deep to the vagal trigone in the floor of the fourth ventricle. The fibers that arise from this nucleus supply the heart, lungs, bronchi, esophagus, stomach, small intestine and large intestine up to the right two-thirds of the transverse colon.

The spinal nucleus of accessory nerve (CN XI) extends from the medulla to approximately C5. Fibers from this nucleus innervate sternocleidomastoid and trapezoid muscles responsible for flexion and lateral rotation of the head and movement of the scapula, respectively.

The hypoglossal nucleus (CN XII) is an extended column located between the posterior (dorsal) nucleus of the vagus and the midline of the medulla. The fibers arising from this nucleus innervate the muscles of the tongue. 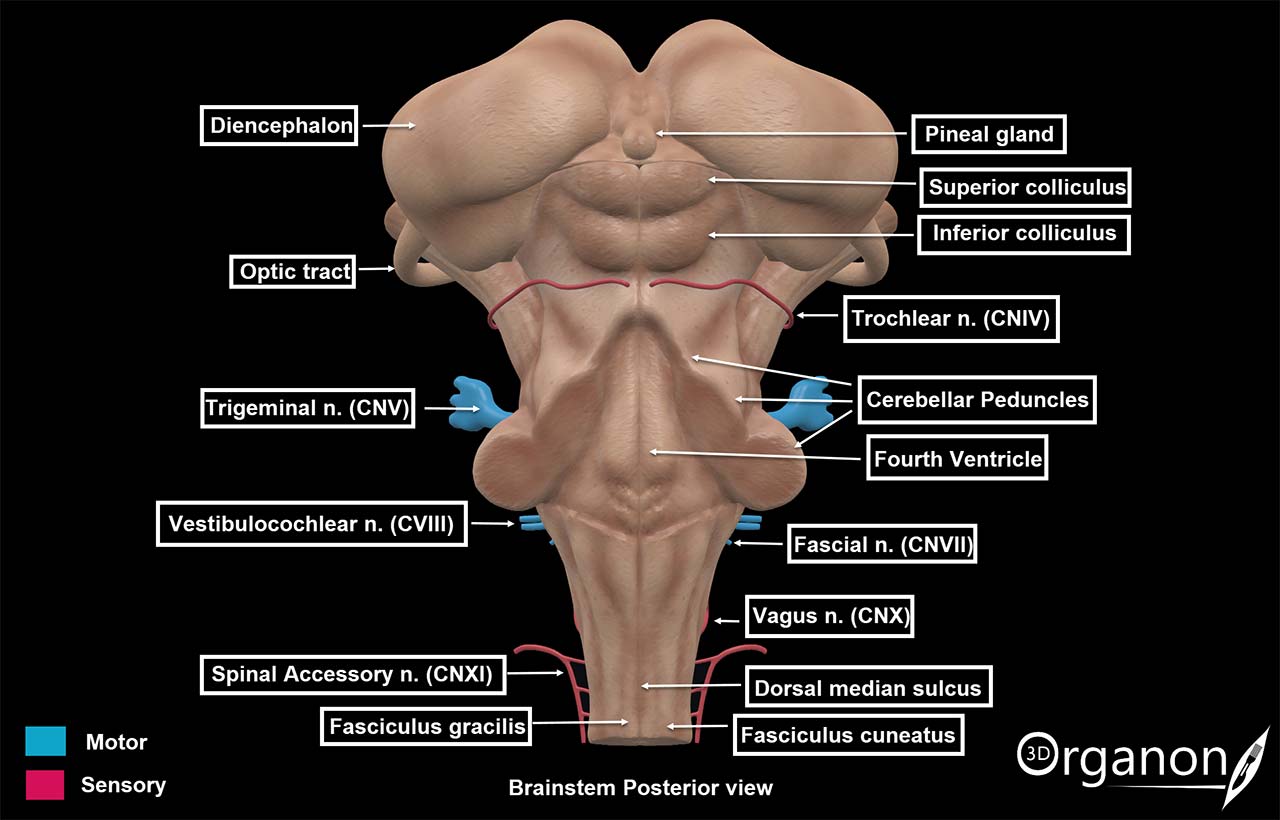