The Ventricular System of the Brain. CSF Production, Circulation, and Clinical Significance 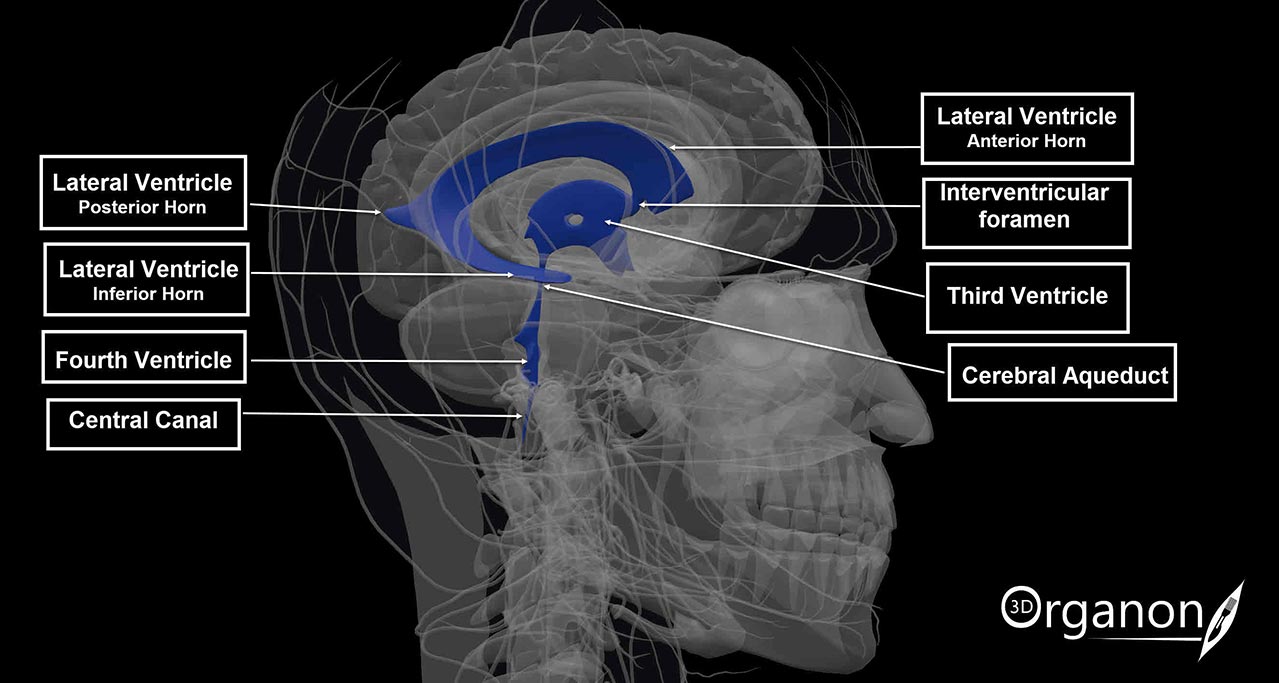 The brain’s ventricular system is a set of communicating cavities where cerebrospinal fluid (CSF) is produced and circulate. The CSF is produced by plasma filtration and is contained in the subarachnoid spaces of the cranium and spine. Its role is vital and includes nourishment, waste removal, and protection of the brain and spinal cord. The CSF is produced in the choroid plexus lining the ventricles. There are four ventricles in the brain; the right and left lateral ventricles, the third ventricle, and the fourth ventricle.

The right and left lateral ventricles are located within the cerebral hemispheres. Their horns project into the frontal, occipital and temporal lobes, and they are named respectively anterior, posterior, and inferior (temporal) horns.

The third ventricle connects to the fourth ventricle via the cerebral aqueduct. It lies posteriorly within the brainstem, at the junction between the pons and medulla oblongata. From the fourth ventricle, the CSF drains into the central spinal canal and the subarachnoid cisterns. Then it is reabsorbed back into the circulation through the arachnoid granulations. The arachnoid granulations are small projections of arachnoid mater that protrude into the dura mater and allow the CSF to drain into the dural venous sinuses.

The clinical significance of the CSF is vital. Hydrocephalus is a pathological condition of abnormal accumulation of CSF caused by increased CSF production, blockage of flow, or decreased absorption. Also, the diagnosis of meningitis, subarachnoid hemorrhage, encephalitis, autoimmune disorders such as multiple sclerosis and malignancies can be confirmed via CSF analysis. A lumbar puncture is an invasive procedure used to remove a CSF sample from the subarachnoid space in the lumbar spine.